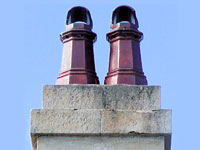 Avon Fire & Rescue Service (AF&RS) firefighters are urging homeowners with chimneys to make sure they are swept regularly.

That compares to February 2011 when there were 12 chimney fires for the entire month.

Avon Fire & Rescue Service Community Safety Officer, Lee Wright, said: “One of the main reasons a chimney catches fire is because of a build up of debris inside. Chimneys where fires are burning smokeless fuels, bituminous coal, oil or gas should be swept at least once a year. Those burning wood need to be swept every three months when in use.”

How to prevent a chimney fire:

If you do have a chimney fire:

Lee said: “One of the best things you can do to protect your home and family is to ensure you have a working smoke alarm fitted. Smoke alarms provide an early warning sign that a fire has broken out, giving the occupants vital minutes to escape and dial 999 – but only if they are working properly. Just two or three breaths of toxic smoke is enough to render a person unconscious so the quicker you leave the premises the better.”