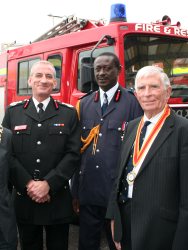 The Gambia has recognised the Chair of Avon Fire Authority along with Avon Fire & Rescue Service’s Chief Fire Officer with prestigious civic honours.

Councillor Terry Walker and CFO Kevin Pearson were included in Gambian President Dr Yahya Jammeh’s 2013 honours list. The fire service leaders have received the Member of the Republic of The Gambia (MRG) award, a distinction rarely given out to foreign nationals. The title is similar to an MBE in the United Kingdom.

The award was made as a result of Avon Fire & Rescue Service’s more than 20 year association with the West African state. Through the work of The Gambia and Avon Fire Services in Partnership (GAFSIP) charity, AF&RS has provided equipment and vehicles that have reached the end of their life in this country to their Gambian counterparts. Volunteers from AF&RS also visit West Africa every year to provide advice and training to local firefighters.

“I am obviously extremely proud but equally humbled.  I hope that we continue the successful partnership with the Gambia as I recognise the difference it makes to the Gambian people.”

Dave Hutchings, former AF&RS Chief Fire Officer and founder of GAFSIP said: “Terry in particular has supported me since 1991 at the very start of the initiative, his commitment has been outstanding even throughout the challenges that have occurred over the years, I would therefore wish to add my own sincere thanks and appreciation to Terry.

“Kevin has continued to support the project both on a personal basis and visiting with members, he has supported and facilitated my ability to continue since my retirement for which I and The Gambia are grateful.”


GAFSIP was formed in 1991 when former AF&RS Chief Fire Officer Dave Hutchings was on holiday in The Gambia. He witnessed a road traffic collision in which a number of people died due to a lack of fire cover in the country.


Dave was so moved by the tragedy that on his return to Avon he sought the support of the Chair of Avon Fire Authority, Councillor Terry Walker, to raise funds and send equipment no longer being used in Avon to The Gambia.