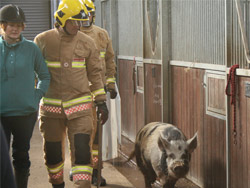 Dominic the pig proved too hot to handle for a team of firefighters as he did everything he could to elude their grasp.

The 200lb - 14-stone – porker, now nicknamed “Fireman Ham”, was helping crews learn how to handle animals in case they have to rescue them for real.

The Kune Kune pig was rescued a year ago after his elderly owner died, and he was taken to the HorseWorld charity in Bristol.

There the 18-month-old, who is still growing, quickly proved popular with staff for his friendly but cheeky manner.

And after he made several bolts from freedom, staff at the centre realised he would be the perfect choice to help firefighters learn how to handle animals without harming them.

Firefighters have become familiar faces at HorseWorld, regularly attending sessions to learn how to deal with a variety of animals including horses, cows, sheep and turkeys.

Now Dominic has joined the animal assortment, and has certainly been giving firefighters the run-around. 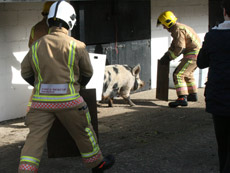 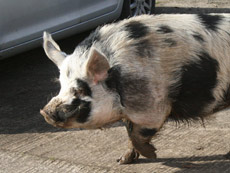 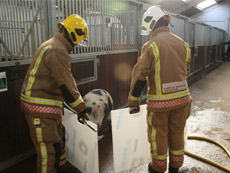 Watch Manager Steve Quinton said: “This is all part of an animal training programme following on a lead from the Chief Fire Officers Association in conjunction with partnerships with the National Equine Vets Association and HorseWorld.

“We have all learned a great deal about how an animal will react, and can now deal with it based on its behaviour, having learned how to hold it and how to lead it.”

Firefighters use blankets and boards to help create a walkway for the ‘escaped’ animal, and to try to gently herd the pig wherever they want it to go.

Jess Savage, from HorseWorld, said: “Dominic is great for helping firefighters realise how difficult it can be to control animals but hopefully they leave the training with a better understanding of animals and how to handle them.”

She added: “Dominic loves the attention and his new role, he gets a lot of fuss and attention.” 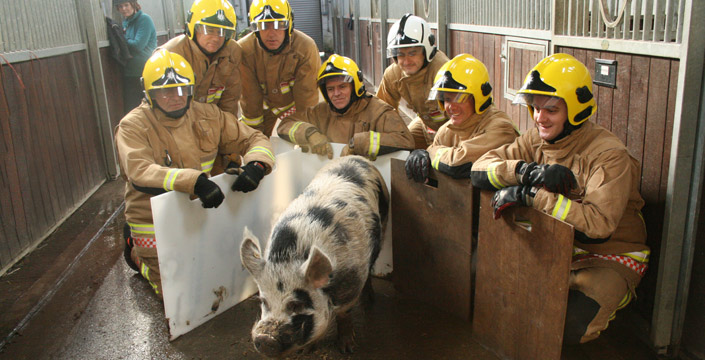