Rescue dogs put through their paces

A dozen dogs have been put through their paces near Bristol this week, sharpening up their search and rescue skills.

Specialist teams from all over the country converged at the former Barrow Hospital site, near Long Ashton, for three days of training.

The derelict buildings, piles of rubble, and rugged landscape provided the perfect backdrop for rescue exercises.

Each of the dogs belongs to a fire service USAR team (Urban Search And Rescue), which specialises in rescuing people from rubble, collapsed tunnels/mines, quarries, and in searching for people.

There are 19 USAR teams nationwide, and a total of 21 dog teams.

Collies, Labradors and Springer Spaniels are the most common breed of rescue dog.

The dogs are all aged between two and eight years.

Their training starts from their selection as puppies, and takes about 18 months.

They are specially trained to sniff out live casualties.

If they were to go into a building in which there were dead people and live casualties, the dogs would effectively not see the dead bodies, and would completely ignore them.

Their focus is very much on the specific scent given off by live people.

Each dog will indicate that they have found a casualty by barking.

This can be potentially life-saving, in scenarios involving large buildings or large areas of rough land.

A dog can quickly indicate signs of life so that rescuers can target their efforts where they are most needed.

The dogs are trained on the basis that a search is a game, and successful results will see them get a reward, usually by being given a toy. 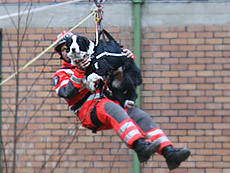 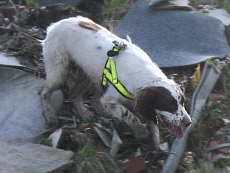 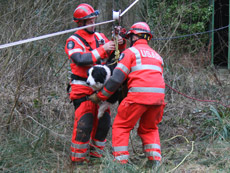 Among the dogs taking part in the three-day exercise was Bryn, the Avon Fire & Rescue Dog, together with handler Steve Buckley.

Another dog was Kirby from Essex, whose handler, Graham Currie, said was involved in a life-saving rescue last year.

Within days of his formal grading as a rescue dog, Kirby went to a block of flats in Clacton-on-Sea where there had been a gas explosion.

In less than a minute, Kirby was able to alert firefighters to a man who was trapped under more than four feet of rubble, so they were able to concentrate their efforts on where they man was.

During the three day exercise the dogs were tested in a number of scenarios, including finding live ‘casualties’, who were trapped in rubble, and using a cable system to leave the third floor of a building.

Cable systems can be used to transport dogs into and out of areas which are just too difficult or dangerous for humans to get in and out of, including buildings with collapsed stairs, quarries, cliff faces and other treacherous terrain.

The cables can also be used to transport casualties on stretchers 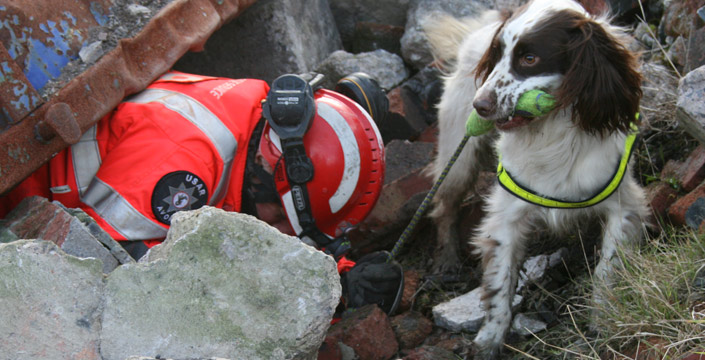