Rowing into the record books 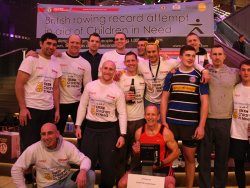 An Avon Fire & Rescue Service (AF&RS) team has a million reasons to celebrate after rowing into the record books.

The ten-strong team is claiming a new British record for rowing one million metres on a Concept 2 rowing machine.

And in the process they have raised thousands of pounds for the BBC Children in Need Appeal.

But the AF&RS team smashed that target by more than 81 minutes, completing the task in 64 hours, 30 minutes and 53.8 seconds.

It all happened in the ‘Pit’ at Cabot Circus, starting at 02.00hrs last Wednesday and finishing just after 18.30hrs on Friday, Children in Need night itself.

By the time all the pledged money is counted, the amount raised for the charity will be more than £6,500.

One of the organisers was Mike Collin, who said: “It was a truly remarkable effort from all members of the team, whose age range varied from 16 up to 54.

“To beat the record the team had to row at a pace that exceeded 9.5 miles per hour.

“For a bunch of guys, over half of whom will probably avoid the rowing machine for the rest of their lives, it just serves to highlight the general fitness of firefighters.

“What enabled this team to perform so impressively was their determination to dig in throughout the whole event without any let up.

“Team spirit is what the fire service relies on most and these three days has witnessed that in abundance.”

There was a dedicated support team alongside the rowers throughout the record attempt, including a qualified physio.

Mike said: “It’s been a truly remarkable and painful experience, but in return for the pain along the way there is more satisfaction at the end.”

• Less energetic members of AF&RS staff raised more than £200 for Children in Need by supporting a cake sale and gingerbread house decorating competition at the AF&RS headquarters in Bristol on Friday.