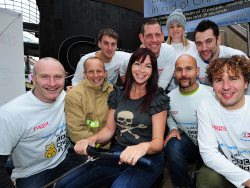 A team from Avon Fire & Rescue Service (AF&RS) is hoping to row into the record books and raise thousands of pounds for charity in the process.

The ten-strong team is aiming to set a new British record for rowing one million metres – 625 miles – on a Concept 2 rowing machine.

They are hoping to raise £5,000 for the BBC Children In Need appeal.

The current record stands at 65 hours, 52 minutes and 39 seconds.

It’s all happening at Cabot Circus, starting at 02.00hrs on Wednesday 14 November, and ending (hopefully) at around 20.00hrs on Friday 16 November, which is Children In Need night.

The ten-strong team is made up of eight serving AF&RS firefighters.

With them is former firefighter Craig Peterson, now with Essex Police, who came up with the idea for the event.

And for firefighter Mark Gibbs, whose idea it was to make the record attempt, it is a family affair, because the tenth team member is his teenage son Matthew, aged 16.

The ten rowers will be assisted by ten “buddy rowers” whose task will be to record, witness and sign all the individual performances.

Halfway through the challenge the team had a surprise visit in the form of TV star Suzi Perry who stopped by to show her support.

The website includes a sweepstake competition where people can guess the finishing time of the team.

And in return for a donation, the closest guess will win a Bristol Marriott Hotel weekend break, with bed and breakfast for two people for two nights, plus two cases of Bath Ales.