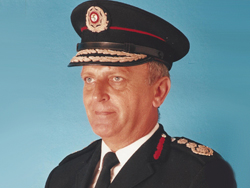 A former Chief Fire Officer what was Avon Fire Brigade, Andrew John Walters, has died after a long illness.

The 67-year-old passed away on Tuesday (22 May).  His funeral will take place on Wednesday 30 May at St Peter’s Church, Frampton Cottrell, at 10.30hrs.

Andrew’s career started with Worcester Fire Brigade in 1968, where he rose through the ranks to become Station Officer.

He became Chief Fire Officer in 1992 and held that post until his retirement four years later, the same year in which he was presented with the Queen’s Fire Service Medal by Her Majesty The Queen at Buckingham Palace.

Having been recognised as an “officer with potential”, Andrew had completed an accelerated promotion course at The Fire Service College.

Highlights of his illustrious career include being Staff Officer to Her Majesty’s Inspector of Fire Services, and leading the development of a new Command and Control Centre for Avon, which was opened by HRH Princess Anne.