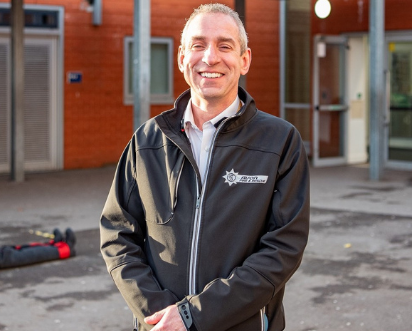 Simon Shilton has today been appointed by Avon Fire Authority as the new Chief Fire Officer (CFO) for Avon Fire & Rescue Service, taking up the post on 1 April 2022.

Selected as the People and Culture Committee’s nominated candidate for the post, the decision was unanimously approved at today’s (11 February 2022) full Avon Fire Authority meeting.

“The process for appointing the Service’s next Chief Fire Officer was incredibly rigorous and both candidates involved in the process were of high calibre. Simon’s passion and wealth of operational and strategic experience gave us full confidence he is the right person to lead the organisation.

“The Fire Authority would also like to thank Mick for the dedication and leadership he has shown in the role of Chief Fire Officer, particularly in leading the organisation through a difficult time following the Baker Review and throughout the ongoing pandemic. We wish him well in the future.

“We are assured that under Simon’s leadership the Service will continue to thrive on its continual improvement journey and in being the best Fire and Rescue Service for the communities we serve.”

Having been part of the fire and rescue service for 28 years, during his time, Simon has held the positions of Station Manager, responsible for Urban Search and Rescue, Incident Command Trainer and Training Manager.

Joining and spending the first 15 years of his career at Avon Fire & Rescue Service, he was located as an operational firefighter at Avonmouth, Bath, Temple and Southmead Fire Stations.

In 2008, Simon worked for West Midlands Fire and Rescue Service for nine years, leaving as an Area Commander, before re-joining AF&RS in January 2017 as Assistant Chief Fire Officer for Service Delivery Support. During this time, he has also held the temporary position of ACFO for Service Delivery.

On receiving the news of his appointment, Simon said: “It is truly an honour for me to be appointed as the next Chief Fire Officer for Avon Fire & Rescue Service and I would like to extend my gratitude to the Fire Authority for giving me the opportunity to take on this role.

“Having spent most of my career with Avon Fire & Rescue Service, I’m looking forward to all that the role has in store.  I will of course be building on the outstanding contribution made by Mick and personally and on behalf of the Service, I wish him all the very best on his next adventure.

“I fully recognise the responsibility this role brings and although it will no doubt be incredibly challenging, I am grateful to be supported by a strong leadership team and work alongside many talented professionals who work relentlessly to ensure we are the best Service we can be.

“I am committed to working hard to ensure the highest levels of safety for all who live and work in our communities and working side-by-side with our dedicated and hardworking staff, we will continue to Make our Communities Safer and Make our Service Stronger.”