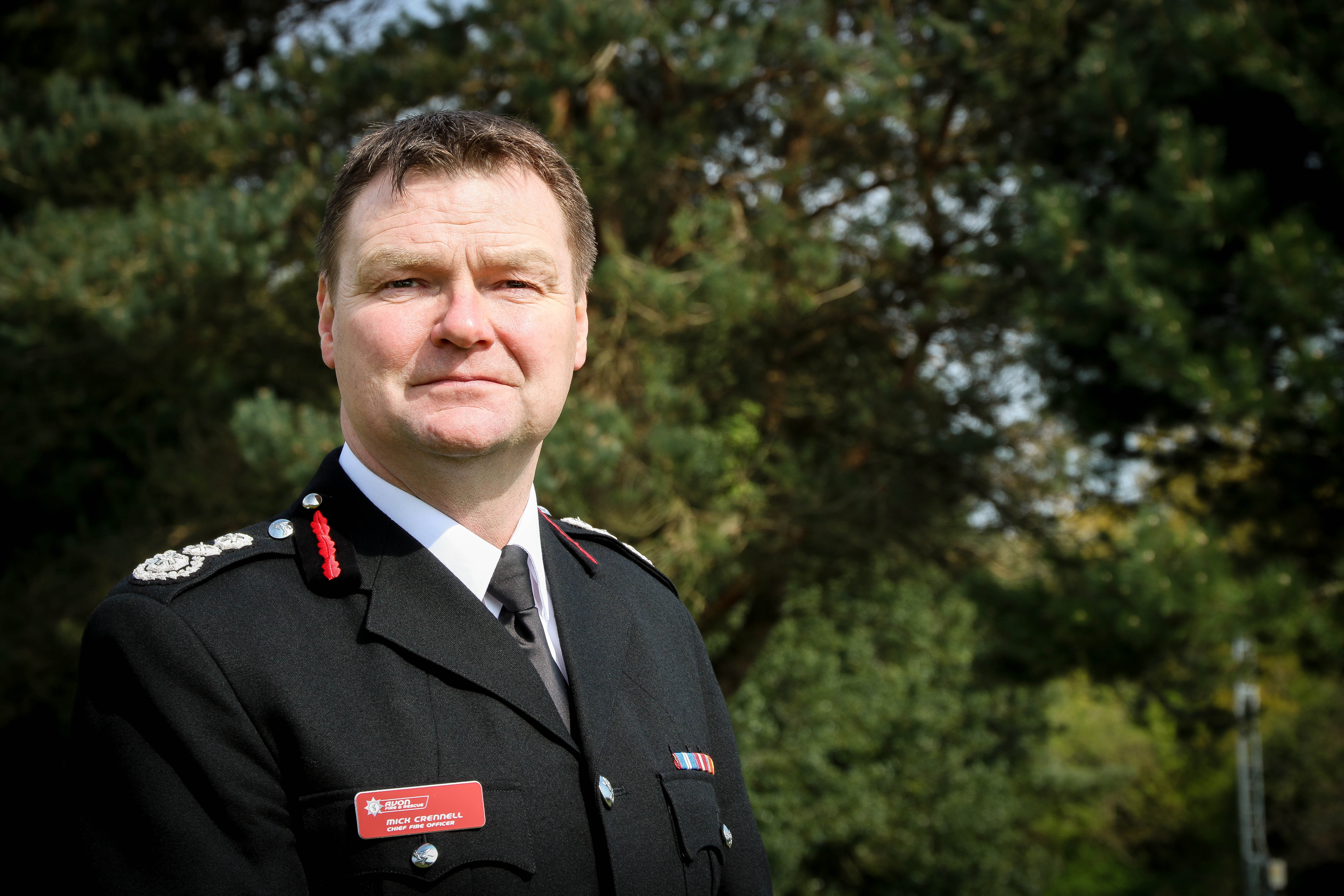 The Chief Fire Officer (CFO) of Avon Fire & Rescue Service (AF&RS), Mick Crennell has today, 6 September 2021, announced his plans to retire from the Service at the end of March 2022, after 30 years with the fire and rescue service.

Embarking on his career as a Firefighter in Hampshire in 1992, CFO Crennell progressed through the ranks before joining Mid and West Wales in 2015 as Deputy Chief Fire Officer, a post he held for two years, prior to joining AF&RS.

CFO Crennell initially joined AF&RS on an interim basis in August 2017, before being appointed the permanent position of CFO and Chief Executive within the Service in September 2018.

During his career, CFO Crennell has also achieved a number of academic accolades including a Certificate and Diploma in Management Studies, a Master’s Degree in Business Administration, is a graduate of the Institution of Fire Engineers, as well as having completed the Fire and Rescue Service Executive Leadership Programme and the Cabinet Office Leadership Programme.

CFO Crennell said: “Firefighting is a true vocation and I feel privileged to have been afforded a fantastic career, dedicated to public duty, which has seen me serve at every level within the Service from Firefighter to Chief Fire Officer.

“When I first joined the Fire and Rescue Service, there was a strong focus on response, however over the years the sector has developed and changed significantly, to create an emergency service where community safety is at the core of everything we do.

“I joined Avon Fire & Rescue Service at a time when it was facing significant adversity and challenge and feel incredibly proud of how far we have come in responding to the issues identified, making significant improvements and tackling them head on.

“I would like to thank and express my pride in everyone at AF&RS, for everything they do, every day; for their dedication, professionalism and commitment in Making our Communities Safer and Making our Service Stronger.

“With the investments made and hard work undertaken in the last four years, I feel I will be leaving the Service is in a strong place and on course to be a great place, but there’s always more to be done in striving for continuous improvement.

“After 30 years of public service, I feel it is the right time to retire from the Fire and Rescue Service and I have every confidence the Service will continue its journey with new leadership.

“I’ve had the privilege of working alongside and leading wonderful people, had some incredible experiences and learnt many life lessons.  I have loved my time with Avon and will look back on my service with great fondness and much pride.”

“I have announced my retirement early to enable the Fire Authority sufficient time to seek my replacement, During the next six months I will continue to lead the Service as normal but will also support the Fire Authority in the recruitment and selection for the next Chief Fire Officer for Avon.”

Cllr Brenda Massey, Chair of Avon Fire Authority said: “Mick has been an inspirational leader during his time as Chief Fire Officer of Avon Fire & Rescue Service and we will be very sorry to lose him. He joined us at a difficult period and is leaving with the Service in a much better state, thanks to his leadership. We wish Mick and his family a very happy retirement with many more adventures to look forward to now he has more time to fulfil his dreams!

“Following this announcement, we will begin the recruitment and selection process for the next Chief Fire Officer and new leader of AF&RS and we’re grateful that Mick will be supporting us with this.  As a Fire Authority we are here to ensure the effective, efficient and value for money fire and rescue service that our local communities have come to expect.  We will be looking for a leader who can continue to support the service on its continual improvement journey.”

Cllr Donald Davies, Vice-Chair of Avon Fire Authority said: “In summer 2017 I was elected chair of the fire authority in a period of great challenge, both operationally and politically. Through the good offices of the national fire service family, one man stepped forward to help, Mick Crennell. He did not need to do so, but it is a mark of the man that he accepted our offer to lead AF&RS. And he has led us, with the help of the whole Service, to transform AF&RS to where it is today and to set out a clear path of where it needs now to go. We are all extremely grateful to Mick for his endeavours in keeping the people of Avon safe and wish him well in what will undoubtedly be an active retirement. Mick Crennell, our Chief Fire Officer, thank you!”

This won’t be the end of the challenges for Mick, as he is in the process of planning some life adventures including to climbing Aconcagua in Argentina at nearly 7,000m in November/December 2022, having previously trekked to Everest Base Camp and summiting on Island Peak for the Firefighters Charity in 2015.