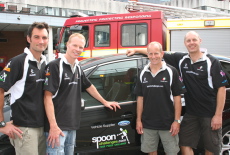 During the event, which started on Thursday 1 July, the team scaled Ben Nevis, in Scotland, Helvellyn, in England, Snowdon, in Wales, and Carantouhill, in Ireland over a 48 hour period.

Using their experience of taking part in the Three Peaks Challenge, the team competed against 42 other groups, completing the event in seven hours and 15 minutes, two hours ahead of their nearest rivals.

Mike Collin, who led the ‘Jampotters’ team said: “It was a fabulous event, very tough going but very rewarding. When you compete in the Three Peaks Challenge you don’t get to interact with many of the other teams, but in the Four Peaks event you get together at the start of each mountain, so there was lots of camaraderie.

“This was the first time we had taken part in this event, and while it was tough at times, we were a strong team and kept each other going through the tough times.

“Some of the teams came from all over the world including Dubai, Germany, Sweden and Australia and there was a great atmosphere. I am hoping we will be able to enter a team next year too.”

So far the Jampotters have raised nearly £5,000 for the Wooden Spoon charity, which helps disadvantaged and disabled children and their families.

Mike said: “While we have already raised a significant amount of money through events and donations, we are keen to raise as much as possible for this very worthwhile cause. We realise there are many good causes out there worthy of support, but we would be very grateful for any donations we receive.”

To make a donation visit www.justgiving.com/4peaksjampotters

The team received a number of contributions from corporate sponsors including Ford, who donated an S-Max car for the team to use on their journey.

The team is hoping companies encouraged by their efforts this year will sponsor them for the 2011 Four Peaks Challenge.