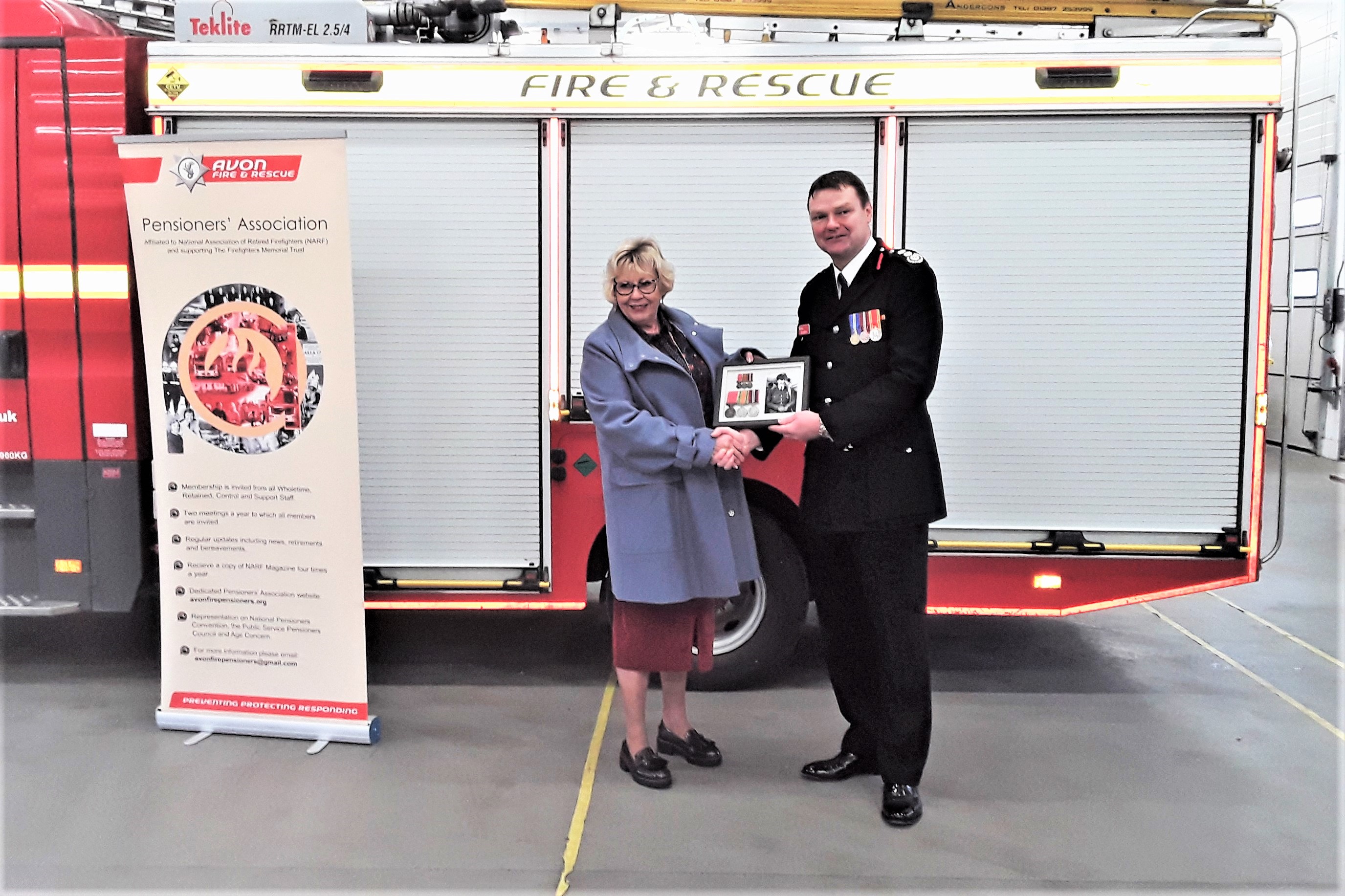 Avon Fire and Rescue Service (AF&RS) has reunited a family with a set of medals after they were donated for display.

Section Officer Winifred Adelaide Tribe was awarded the British Empire Medals for her service in the Bristol Women’s AFS during WWII.

Winifred Tribe’s daughter, Jennie Hughes, contacted the Fire Service in 2003 to see if they would like to have her mother’s war medals to display.

Following a makeover of the HQ, the medals were eventually put on display in reception as part of a collection of fire service exhibits.

She was delighted to be asked to go to the opening of the Exhibition in November 2003.

Jennie and her husband found it fascinating as they met some retired Firefighters who had known her mother during the Blitzes and remembered her feeding them.

Mick said: “I am delighted to be able to return these medals to their rightful owners. Winifred was clearly an exceptional firewoman and one that went above and beyond in the line of duty.

“Her medal sat proudly at our HQ for so many years, but now it is time it returns home to them to their rightful place and her family.

“We are delighted that her family could come along today and we hope they are as proud of Winifred as we are.”

Jennie added: “It has been fascinating learning more about what my mother did during her time with the Fire Service as she rarely talked about it, and as a family we are very proud to have had her as a mother and grandmother.

“I am extremely grateful to Chris & Penny Deverill for all their hard work in the research they have done”.

Born in 1914 in Wells, Somerset, Winifred and from 1938, was a paid member of the Auxiliary Fire Service in charge of the mobile canteen following a stint as an ARP Warden and Casualties Ambulance Driver.

As the bombing raids increased Freda took her Mobile Canteen “where danger was greatest with complete disregard for her own safety”.

Called out during a daylight raid at Filton Aerodrome on September 25th 1940 the side of her van was virtually demolished when a bomb exploded nearby and, although everything was covered in debris, she cleaned herself and the food before carrying on with her journey to offer firefighters much-needed refreshments.

She continued to serve through several bombings, often receiving praise for her extensive work and dedication to the Service.

Following her years of service, in September 1941 Winifred received a letter informing her that “His Majesty the King was graciously pleased to award you the British Empire Medal, Civil Division”.

She received her medals on the 3rd March, 1942, accompanied by her mother.

Monty Britton, from the AF&RS Pensioners Association, said: “I am pleased to attend the presentation to a very brave lady who cared for the Brigade members who were involved in the Blitzes in Bristol and Plymouth!.

“When I joined the Brigade I was fortunate enough to serve with quite a few Brigade members who had served at that time and spoke very highly of the sight of the Canteen and a cuppa and a smiling face.

”All the staff were dedicated whatever the circumstances."