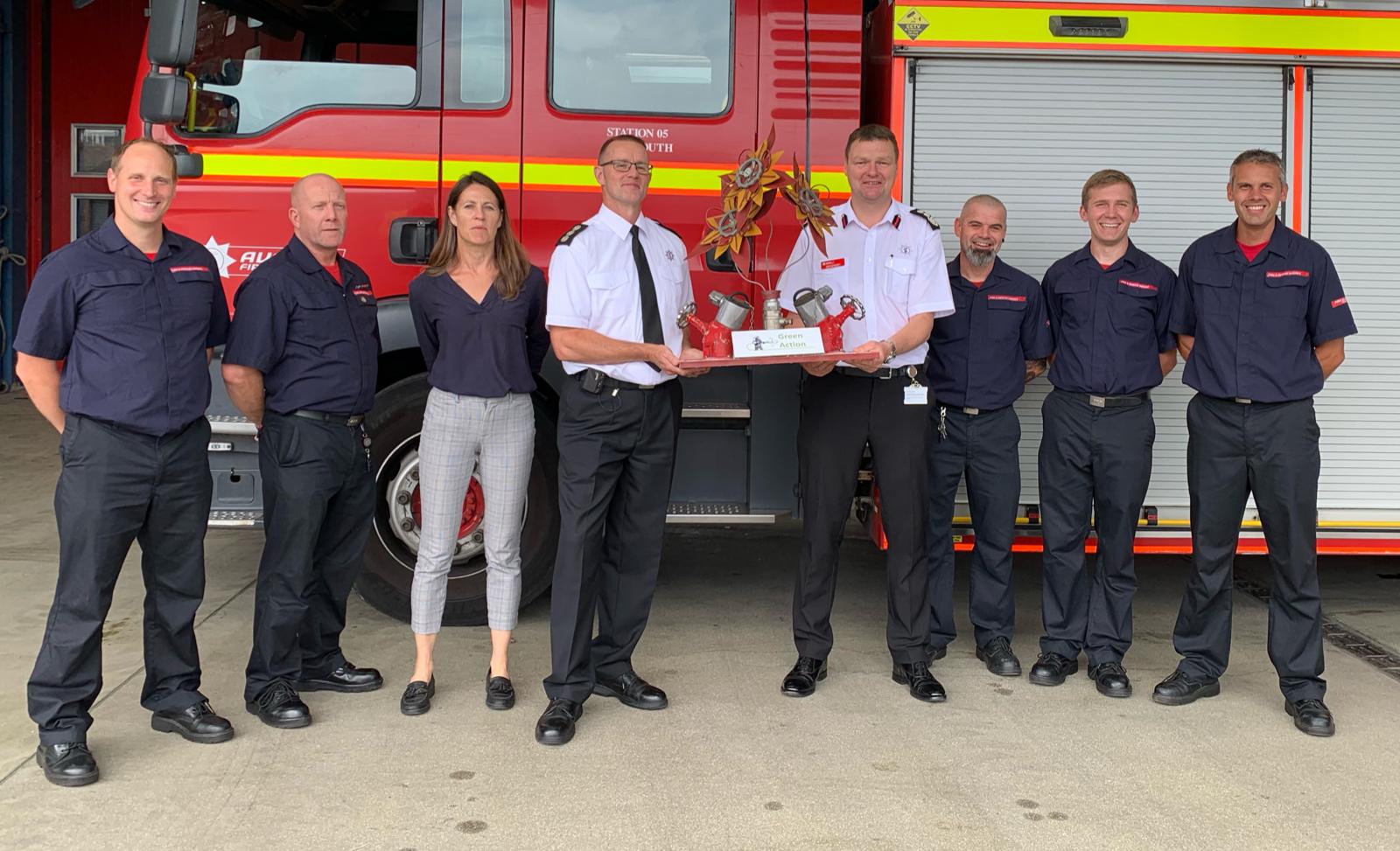 Avon Fire and Rescue Service (AF&RS) is delighted to announce that one of its stations has won a national energy reduction competition.

Fire and Rescue Services from across the country took part in the energy-saving competition to reduce energy consumption over a four-month period throughout the winter, with Avonmouth fire station topping the leaderboard.

Paulton (17 per cent), Winscombe (13 per cent) and Radstock (seven per cent) all came in the top 20 thanks to staff making a positive step towards helping to tackle global warming.

A monthly leaderboard showed the energy savings achieved by participating stations compared to the previous year until the challenge ended in March, coinciding with WWF Earth Hour (24 March).

This is the second year the competition has run, with Eltham Fire Station (London Fire Brigade) taking home the trophy last year after reducing energy consumption by an impressive 35 per cent.

Neil Stradling, Avonmouth Station Manager, said: “I am honoured to present Avonmouth with the Green Action award. The station has not only demonstrated tremendous leadership but also demonstrated new ways to use energy more efficiently and productively. To be placed first out of 66 stations is a fantastic achievement.

“At AF&RS, we believe that optimising the way we manage energy, water, and waste is not only good for the environment, but it's also good for business. We are honoured to be receiving this award; we intend to continue our efforts to serve as a sector leader in environmental protection.

“We acknowledge the impact our daily activity has on the environment, and want to set a positive example to stations across the service, showing them how achievable reducing your energy usage is.”

The world’s leading climate scientists have recently warned that global warming should be kept to a maximum of a 1.5C degree rise, beyond which even half a degree will significantly worsen the risks of drought, floods, extreme heat and poverty for hundreds of millions of people.

To do this, it has been recommended that the UK should set an ambitious target to reduce its greenhouse gas emissions (GHGs) to 'net-zero' by 2050, ending the UK's contribution to global warming within 30 years.

The energy consumed in homes and businesses is responsible for over a quarter of all UK emissions of carbon dioxide, the main greenhouse gas causing global warming.

More efficient energy use by Fire Services across the country can make a small but powerful difference in combatting global warming.

This will help protect the environment, reduce air pollution and enable services to spend more money on training and development.

Annabel Harford, Environmental Project Officer at AF&RS, said: “It was a pleasure to once again work with other Fire and Rescue Services from across the country by taking on the challenge of reducing our energy consumption and bills.

“The staff at Avonmouth fire station did an incredible job of reducing their energy consumption and we are delighted they came out on top. Well done to all involved and long may it continue.

“Although the competition is over, this isn’t the end. We will continue to identify further opportunities for energy saving on our stations, whilst making sure our stations are comfortable working environments.

“As a Fire Service, we have a social and environmental obligation to be as efficient as possible and ensure that we are doing everything we can to reduce our carbon footprint and to protect the environment.

“Global warming affects every fire service and is leading to increasing numbers of unusual events from snow to flash flooding to dry and hot summers.

“To be able to combat that and better utilise our resources will only help to improve response times and efficiencies.”