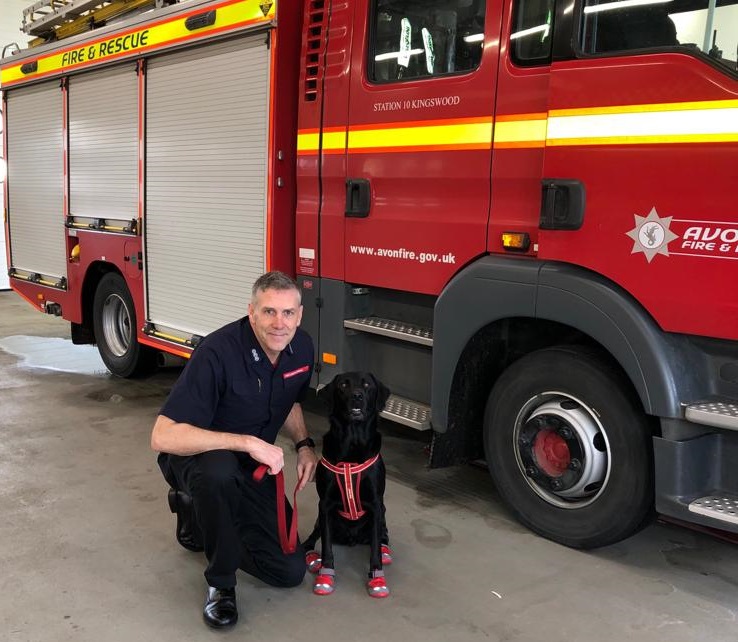 Avon Fire & Rescue Service (AF&RS) welcomes its newest four-legged recruit with a nose for sniffing out the causes of fires – Jet the fire dog.

The five-year-old black Labrador joined the AF&RS’ fire investigation team and is assisting at the scenes of fires across the Service area.

Born in May 2013, Jet was selected at a young age based on his drive for play and ability to follow a positive reinforcement training programme, which rewards him with a tennis ball each time he detects an ignitable substance.

Now living with his handler, Station Manager Martyn Bolt, his initial training was similar to the sorts of steps most dog owners go through to teach general obedience.

Luckily he was a quick learner so in September 2013 aged 16 weeks old, Jet was enrolled on a 12-week fire investigation dog training course.

The role of a fire investigation dog is to use their highly tuned sense of smell to find traces of accelerants which may have been used to deliberately start a fire.

Accelerants are substances, such as petrol, which help a fire to spread more quickly. Even when a fire has been put out and caused lots of damage, fire investigation dogs can still smell exactly where an accelerant was used.

Jet completed his training with flying colours in January 2014 and became the youngest dog to ever pass the course.

Despite being operational for some time, Jet was sadly taken out of Service while a search took place for new handler within the Service.

Now back to being operational following a two-week course with his handler, carrying out an investigation is like a game for Jet.

When he finds traces of an accelerant he will let handler Martyn know by ‘freezing’ and placing his nose close to where the substance has been found.

This results in him getting a ball – which is his favourite toy.

Martyn Bolt, Station Manager and Handler, said: “I’ve been part of the Service for 23 years and have had extensive fire investigation training.

“When it was clear Jet needed a new handler and that the Service could use him in a positive and proactive way, I jumped on the opportunity.

“Jet really is exceptional at what he does. He will be able to help the Service identify ignitable substances which could have been used to start a fire and it never ceases to amaze me when he locates the source of a fire.”

“Not only will Jet be a positive step for fire investigation, but he will also take part in providing information by sharing crucial fire safety messages to the community.

“I’m proud to be his handler and I look forward to working with him over the coming years.”

Jet will be sent into cold fire scenes to search for evidence of ignitable liquids, identifying the areas they were used in, which are documented before samples are taken by the police for analysis.

The speed and accuracy of the dogs can save both police and fire investigators valuable time and resources.

When investigating fire scenes, Jet will wear boots to protect his paws from any shards of glass or other sharp objects and also have his own personal protective equipment (PPE).

Although it might look dangerous, Jet will never be sent into hot scenes and there has been no report of any injury to any fire dog throughout the country.

Dogs are a vital part of the fire service family, and Jet will serve alongside Buddy and Sally in AF&RS. Buddy, a two-year-old Springer Cross, and Sally, a two-year-old Labrador, are currently undergoing their training.

Based at Hicks Gate fire station in Keynsham, Buddy and Sally are training to be ‘air scent’ dogs and will be used to locate live casualties in different environments, from open areas and woodland to collapsed structures.

Firefighter and Handler Martin Tully, who is responsible for Buddy’s training, added: “The role of a modern firefighter has changed and Avon Fire and Rescue Service deals with an increasing number of varying incidents, one of which is urban search and rescue.”

“The dogs are trained using toy rewards - if a dog successfully finds a casualty, they are rewarded with the toy and a game of tug.”

“Throughout their training, Buddy and Sally have been introduced to people of all ages, backgrounds and ethnicity so that they learn to trace and locate all human scent.”

Buddy and Sally will complete their training towards the end of April before becoming fully operational.

You can follow Jet the fire dog, along with updates from Buddy and Sally, on Twitter - @AFRSDog