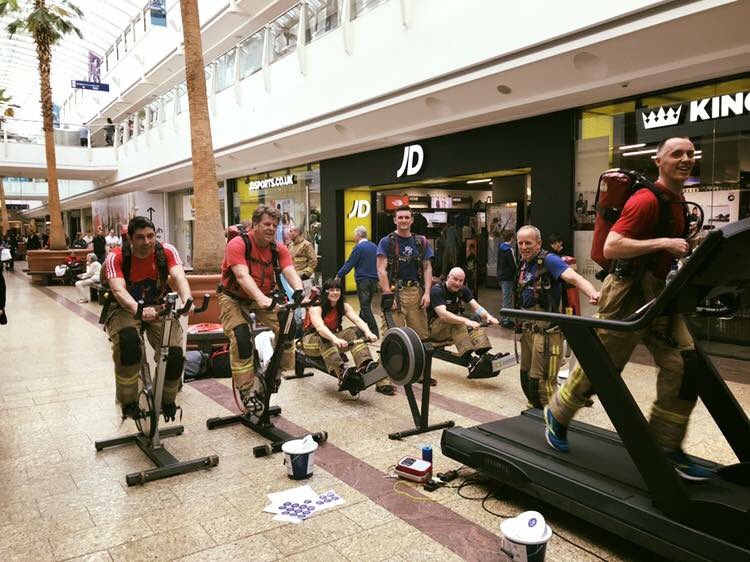 From Friday 4 May, staff from Avon Fire & Rescue Service will be running, cycling and rowing for 60 hours in Bristol’s Cabot Circus to raise money for three year old Daisy.

Daisy Roberts from Bristol has cerebral palsy and needs an operation to help her to walk unaided, which costs approximately £25,000 and is not funded by the NHS.

Firefighter Mike Collin from Avonmouth Fire Station is the driving force behind the fundraising efforts and has organised a number of challenges already this year to raise the much needed funds.

Mike said: “When Daisy’s mum got in touch to ask if there was anything we could do to help raise some money, I had no hesitation in saying yes.

“The first event I organised in February was a six hour static triathlon at Cribbs Causeway where we managed to raise £3,400.

“Following this, eight of us tackled the 30 mile west Mendip Way from Wells Cathedral to Uphill in Weston-super-Mare. Four of the group ran the route in an impressive eight hours and the walkers crossed the finish line in just over 12 hours.”

The next challenge for Mike and his team of willing volunteers is the big one and starts at 8am on Friday 4 May, at Cabot Circus in Bristol. The aim is to cover 1,200 miles in five days using treadmills, static bikes and rowing machines.

Mike said: “Almost 40 staff from the Service have volunteered their time over the five days, with firefighter Lee Harding aiming to cycle 300 miles in one hit on the first day of the challenge and others planning to cover marathon and half marathon distances.

“The final challenge will see over 30 colleagues, partners and friends running the Bristol 10K on Sunday 13 May for Daisy. Twenty-two will be running in full fire kit, with a breathing apparatus set and just to make things a little more challenging, they will also be carrying a 60 kg ladder around the route.”

Mike added: “Throughout these challenges the public have been amazing in showing their support and generosity. We’re hoping that they’ll come and cheer us on over the five days at Cabot Circus and during the Bristol 10K to help us to raise as much money as possible for Daisy.”