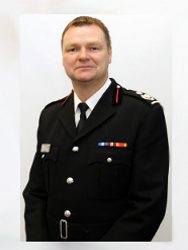 CFO Crennell’s appointment was confirmed at a meeting of Avon Fire Authority’s Employment Committee Panel on Wednesday 9 August. He has been appointed on a six month contract in the continued absence of CFO Kevin Pearson.

The Chair of Avon Fire Authority, Councillor Donald Davies, said: “I’m grateful to the National Fire Chiefs’ Council for their support in assisting us in bringing in an interim Chief in such a short timescale.

“I’ve already had a number of meetings with CFO Crennell and I’m confident he has the skills and leadership qualities the Service needs at this moment.

“When the Home Office report was published last month I asked that we are judged by our actions not just our words. Just three weeks on we are already working to an approved action plan and have an interim Chief Fire Officer in place who will lead the changes we need to make in the immediate future.

“We are also in the process of establishing an Independent Improvement Programme Board to monitor progress towards our goals and provide regular reports to the public, Avon Fire Authority and the Home Office. The board will be chaired by Huw Jakeway who is the Chief Fire Officer at South Wales Fire & Rescue Service and the Vice Chair of the National Fire Chiefs’ Council.

“We will not undo the mistakes of the past in a single stroke, but through the positive action we’re now taking we have started that journey to improvement.”

Speaking following his appointment CFO Crennell said: “I’m delighted to have the opportunity to join this proud service at such a critical time. The past few weeks will have been both disappointing and unsettling for the public and staff - as someone new and independent to the Service it will be my role to restore that trust and confidence.

“Whilst I don’t underestimate the task that lies ahead, having already spent a few days in the Service I know there are many excellent uniformed and support staff who are committed to making the changes that need to happen.

“I’ll be working closely with the Chair of the Fire Authority and other key stakeholders to ensure we now concentrate our efforts in the right areas to deliver the improvement action plan that’s now in place.

CFO Crennell added: “Avon Fire & Rescue Service has always provided a fantastic emergency response service to local residents – that has never been called into question. The public can therefore continue to have the ultimate confidence in our blue light service should they ever need us.”

Avon Fire Authority is continuing to receive peer support from the Local Government Association and the National Fire Chiefs’ Council will continue to provide peer support to the officers of Avon Fire & Rescue Service.

Roy Wilsher, Chair of the National Fire Chiefs’ Council, said: "We welcome DCFO Crennell’s interim appointment which, we are sure, will bring a period of stability and continuity to Avon Fire & Rescue Service.

“We fully appreciate that this is a very challenging time for all of our colleagues at Avon. I would like to take this opportunity to recognise there is a commitment to professionalism and keeping their communities safe.”

Councillor Simon Blackburn, Chair of the Local Government Association’s Safer and Stronger Communities Board, said: “We look forward to working with Mick Crennell in this new role, in particular to help AF&RS develop a plan which proactively responds to the recommendations of the inspection report and helps support the fire service’s improvement.”