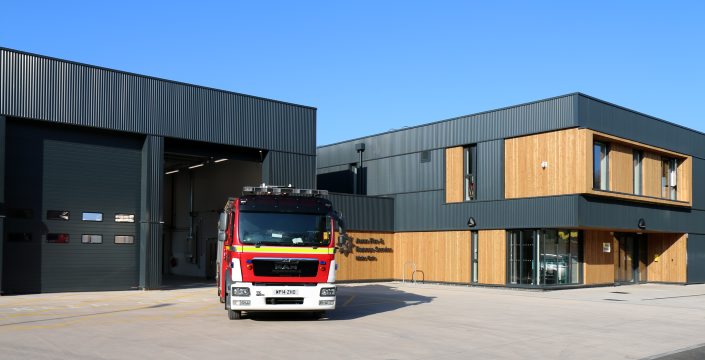 The station on Durley Hill has been under construction for 13 months, but from this morning crews began operating from the site to respond to emergency calls. The new wholetime station will be staffed 24 hours a day, seven days a week.

Located on the Hicks Gate roundabout, the station has excellent access to the A4 and the Avon Ring Road. As well as serving the communities of Keynsham and Brislington, the station’s access to the road networks will ensure support can also be provided into Bristol, South Gloucestershire and Bath.

The station will be home to one fire engine, a foam unit, a salvage unit, the Environmental Response Unit and the Red Cross Emergency Response vehicle.

Facilities on the site include a training tower, a hot fire training facility and a confined space training facility. The station has also been built with a number of environmentally friendly features, making it one of the most energy efficient fire stations in the UK.

The station has photovoltaic panels, which it is hoped will generate each year the equivalent of around 50% of the total annual electricity usage at the former Brislington Fire Station. The inclusion of intelligent heating and lighting systems and advanced insulation mean AF&RS is hopeful the building will reach the highest DEC ‘A’ energy rating.

Hicks Gate Fire Station has been built by Willmott Dixon at a cost of £5.4 million and replaces stations at Keynsham, which was crewed by on-call firefighters and was closed last November, and Brislington which closed today.

Chief Fire Officer Kevin Pearson said: “I’m delighted the new Hicks Gate Fire Station is operational and now serving the local community. This is the first brand new fire station built in Avon since 1980 so it marks a real milestone.

“The fire stations at Brislington and Keynsham have served their communities well for many years, but the opening of Hicks Gate Fire Station represents a new chapter and the opportunity for us to provide an even better service.

“The station will be crewed around the clock, which means improved response standards for the areas previously served by an on-call station.

“The new station will also provide a state-of-the-art base and training facilities for our staff which will ensure the continuation of the excellent service we provide to the community.”

The building of Hicks Gate Fire Station is part of the Service’s cost saving ‘Investing for the Future’ programme. The works have already seen the extension of Kingswood Fire Station, which was merged with the nearby Speedwell Fire Station last year.

For more information visit the Investing for the Future section.