Chair of Avon Fire Authority stands down after 34 years 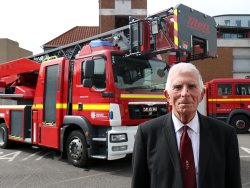 The Chair of Avon Fire Authority, Councillor Terry Walker, has stepped down after 34 years in the role.

At a meeting of Avon Fire Authority (AFA) last month Councillor Walker told members that he would not be standing in May’s election, bringing to a close his time as the longest serving fire authority chair in the country.

Cllr Walker was elected to Avon County Council in May 1981. For five years he was the Chair of the Public Protection Committee which was responsible for the fire service.

When the County of Avon was dissolved in 1996 Cllr Walker was elected to South Gloucestershire Council and appointed to the new Avon Fire Authority. He has been Chair since its inception.

Between 1974 and 1979 he was the Member of Parliament for the Kingswood constituency. Before getting involved in politics, Cllr Walker was a Cost Accountant for Courage’s brewery.

His last public engagements for Avon Fire & Rescue Service was to re-open the recently extended Kingswood Fire Station and cut the turf to mark the start of the building of a new fire station at Hicks Gate near Keynsham.

Both projects are part of the Service’s Investing for Future programme which will make annual savings of £4.5 million a year, while maintaining the service provided to the public.

Avon Fire & Rescue Service’s Chief Fire Officer Kevin Pearson said: “I’ve had the privilege of working with Councillor Walker for a number of years and I’ve never ceased to be amazed by his passion and dedication to the role.

“He is a true champion of the fire and rescue service and can take a huge amount of credit for the excellent service we provide to the public today. To have held the post for almost three and a half decades is a remarkable achievement and one he should be extremely proud of.

“In those 34 years in the role the Service has changed beyond recognition and he has had to weather many storms. However it is his constant and steady presence that has ensured Avon Fire & Rescue Service has been able to go from strength to strength.”

“He leaves Avon Fire & Rescue Service in great shape, with an exciting chapter of development ahead of us through the Investing for the Future programme.”

Speaking about his career with Avon Fire Authority, Councillor Walker, said: “It has been my privilege to have served the Service over all of these years and have been greatly impressed by the high performance of our workforce which has been first class.”