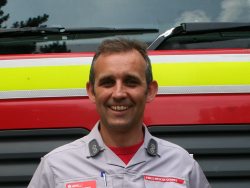 A firefighter from Avon Fire & Rescue Service (AF&RS) is among a team of volunteers heading to Nepal to help with the search and rescue effort following the devastating earthquake.

Watch Manager Paul Incledon, who is based in the AF&RS Operational Training Team, is also a member of the charity Search and Rescue Assistance in Disasters (SARAID).

He is part of a team of 14 fully trained rescue technicians who are on their way to the country with 1.5 tonnes of the latest rescue equipment. They will be heading to the remote Kathmandu valley where they will use sound and vibration detection equipment, as well as specialised search cameras to help locate victims trapped under buildings. Cutting equipment will be used to tunnel into collapsed buildings to rescue victims.

The team is also carrying stretchers and medical kit, ropes, generators, tents, satellite communications and their own food to ensure they aren’t a strain on local resources once in the country.

SARAID is experienced in dealing with incidents of this type having been part of the rescue efforts during the earthquakes of Indonesia and Haiti as well as other natural disasters around the world.

AF&RS Assistant Chief Fire Officer Rob Davis, who is also a SARAID Team Leader, said: “Avon Fire & Rescue Service has a partnership agreement with SARAID meaning that in the event of a disaster of this nature a number of our staff who are also SARAID members can be released from their duties to help those in need.

“In the past staff from AF&RS have been deployed to Indonesia, Pakistan and Haiti to help with the search and rescue effort.

“Just last month we hosted an international conference with delegates from the United Nations coming together in Bristol to discuss the coordination of the response to international disasters like earthquakes, flooding and volcanic eruptions.

“The SARAID team is expected to be one of the first international teams to reach the country and once there they will be focusing on searching for those missing or trapped in the rubble of the collapsed buildings. They will be using sound location devices, camera equipment and propping and shoring equipment to try and locate and rescue casualties.”

SARAID is funded entirely through public donations. To support the team visit http://campaign.justgiving.com/charity/SARAID/NepalEarthquake