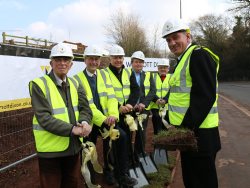 Work to build a brand new fire station at Hicks Gate has commenced this week.

Chair of Avon Fire Authority, Councillor Terry Walker, cut the turf at the site at Durley Hill, Keynsham, on Tuesday 17 March to mark the start of the building programme.

The new fire station, which is expected to take 40 weeks to build, is part of Avon Fire & Rescue Service’s Investing for the Future programme to construct three brand new fire stations at Hicks Gate, Temple Back and Filton, build a new headquarters and expand and upgrade Kingswood Fire Station.

The programme was announced in 2014 as part of efforts to make annual savings of £4.5million as a result of reductions in funding from central Government.

Chair of Avon Fire Authority, Councillor Terry Walker, said: “I am really looking forward to watching work on the new fire station at Hicks Gate progress. This is the first brand new fire station to be built in the AF&RS area since we opened Thornbury Fire Station in 1980.

“The regeneration of Keynsham town centre meant we needed to move the existing Keynsham Fire Station. This has provided us with an opportunity to amalgamate the part-time station at Keynsham and Brislington fire stations, which will both close, into a new Wholetime fire station at Hicks Gate.”

The new fire station at Hicks Gate is being built by Willmott Dixon and will cost £6.2 million.

AF&RS Chief Fire Officer Kevin Pearson said: “This new fire station is great news for local people and our staff who will work there.

“Keynsham Fire Station is currently operated on a part-time basis with staff responding to 999 calls via a pager. The new station at Hicks Gate will be Wholetime, with staff available around the clock to respond to emergencies, improving fire cover for those who live in the area.

“Although Brislington Fire Station will close, the new station will be just 1.5 miles down the A4. There will also be excellent access to major road networks in the AF&RS area with staff based at the new station able to provide improved support to crews in the city of Bath, as well as access into Bath and North East Somerset, Bristol and South Gloucestershire.

“The new station will also provide state-of-the-art facilities for those members of our staff who are based there and ensures the excellent service we provide to the community continues.”

For more information on the Investing for the Future programme click here.