Burgers, bangers and burns – make sure your barbecue is not a recipe for disaster 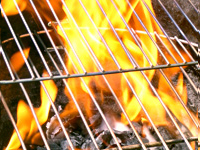 Avon Fire & Rescue Service (AF&RS) is reminding people planning barbecues during the warmer weather to make sure their burgers and bangers don’t lead to burns.

Between April 2013 and March 2014 AF&RS received 42 calls from members of the public who were concerned about barbecues which had got out of control or where hot disposable barbecues had caused bin fires.

As hundreds of families plan outdoor activities AF&RS is asking people to enjoy the weather safely.

AF&RS Station Manager for Community Safety, Martyn Bolt, said: “Cooking food outside can be a great way to enjoy the warm weather but it is vital that everyone using a barbecue does so safely. Barbecues can be very volatile and quickly get out of control.

“Just a few simple steps, like never leaving the barbecue unattended and keeping it well away from shrubs and fencing, can help to ensure a happy event doesn’t turn to tragedy. Many injuries caused by barbecues happen because inappropriate lighting methods such as paraffin and petrol have been used. Only recognised lighters and starter fuels should be used.

“When using disposable barbecues make sure they are disposed of properly when cool and not placed in a bin while still hot. If using a gas barbecue don’t throw water on to it if it gets out of control as the fat and oil could ignite and cause severe burns.”

Station Manager Bolt said: “If you do have a barbecue which gets out of control, don’t try to tackle it yourself as you risk getting burnt or scalded. Dial 999 and ask for the fire and rescue service.”

To find out what happened to a man whose barbecue got out of control, leaving him needing hospital treatment for burns and view the safety advice click here