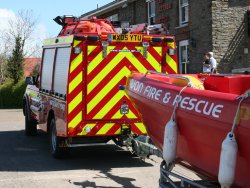 The advice comes after crews rescued a man from the Bristol docks in the early hours of last Saturday morning.

Specialist AF&RS water rescue crews were called by the police to the Welsh Back at 02.30hrs after passing officers heard the man’s cries for help. The police officers managed to get a life ring to the stranded man, but were unable to help him from the water.

A firefighter from the water rescue team entered the docks to support the man while an inflatable raft was brought in to complete the rescue. The man was safely returned to dry land before being taken to hospital suffering the effects of hypothermia.

Bedminster Fire Station Manager Rob Seaman said: “In the run up to Christmas there is a real buzz in the evenings, as people celebrate the festive season. Where people are out drinking near the water in cities like Bristol and Bath, we’re just asking that they give some extra thought to the safety of themselves and friends.

“The last place you would want to end up this time of year is in a river or dock as the water is particularly cold. The low temperatures mean that even extremely strong swimmers will quickly find themselves in real difficulty. Unfortunately what seems like a bit of fun or an accident can have fatal consequences.

“The best advice is to give some thought to how you will get home at the end of the night. If your walk takes you near water and you’ve had a couple of drinks it might be worth thinking about an alternative route or getting a taxi. Looking out for your friends is also really important to make sure you all get home safely at the end of your night.”

SM Seaman added: “Fortunately our crews had the training and equipment to rescue a man from the Bristol docks at the weekend after his cries for help were heard. However in recent years there have been several tragic examples of lives lost in our local waterways and this serves as a sombre reminder as to why taking that extra bit of care is so important.”