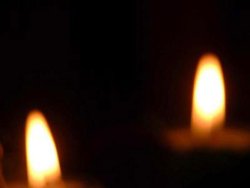 Since April this year AF&RS has dealt with six fires which were started by candles being used incorrectly. Two of those incidents occurred recently - one at a house in Hanham in September while a family were sleeping and the second at a Polish Church in Bristol.

Both incidents were caused by candles left burning unattended.

During Candle Safety Week (Monday 18 to Sunday 24 November) firefighters are reminding people about the dangers of using candles incorrectly.

AF&RS Station Manager for Community Safety John Rides said: “While candles can provide a warm and relaxing environment during the dark nights, they can also cause huge amounts of damage if a fire breaks out because they have not been used correctly.

“Many people use candles as part of celebrations so we hope our safety tips will ensure that those celebrations are happy occasions which don’t end in disaster.

“During candle safety week we want people to think about the way they use candles and follow our safety tips to ensure they reduce the risk of a fire breaking out.”